Home » Bibliography » I Know This Much Is True

Posted by davecahill on June 1, 1998 in Bibliography | 0 comments 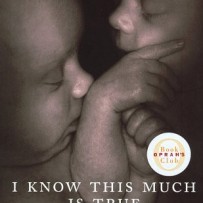